First of all, just a note to say that I've put up a new blog - Game of Thorns - where I can write about non-possum things.

Here's the first (and, if we exclude snapshots taken by the box camera, so far only) photo I have of Kiki's baby Oz. Sorry it's a bit blurred, but I didn't want to get too close and scare the little one.

On the day I took this photo, Oz was exploring the nestbox energetically and on a couple of occasions may have ventured outside the box itself, which is more adventurous than normal for a baby possum. Fortunately it's fairly safe in this location, and most likely he was just perched on the entrance hole.

Northern Rivers Dreaming have posted a lot of cute photos of Kiki and Oz from the same day.

Oz has been back-riding early in the evening, but returns to the pouch before Kiki visits the house. Any day now I expect to get a photo of him back-riding.

Scruffles the Rat has been seen around in the trees but hasn't visited for a while. Last time he visited, he cheekily tried to nip at Amiri, who then swiped at him and chased him off.

Amiri is still around. He seems to be particularly skillful at getting around without making noise. Several times he's appeared on the corner of the balcony, having apparently leaped from a tree a meter away in complete silence. This is something of a feat because even Scruffles can make noticeable noise getting onto the balcony.

Unlike his older brother Spock, Amiri is not very tolerant of Wasabi (which is more normal behaviour for a brushtail) and recently chased him out of a tree. Poor Wasabi had to leap into a nearby tree, but couldn't get a good grip on the foliage and plummeted to the ground approx 7 m below. He then ran off, apparently unharmed. The foliage in the tree partially broke his fall and he landed on a thick layer of leaf litter. Also, I've seen possums fall 5 m onto a brick patio without harm, so it's probably all in a day's work for a possum.

At some time, Wasabi managed to pick up a wound at the base of his tail, but fortunately this has been healing well.


It looks like Tilda and her two babies were the ones using the possum drey, because for a while they were back sleeping in the tree where the remnants of the drey now are. Tilda didn't bother to rebuild the drey, and I think the reason is that she's frequently moving around between different locations and it isn't worth the effort. I'm assuming there are pythons around, although I haven't seen any in a long time.

The unknown possum seen on the 23rd Jan has been named Thor. He is tough and battle-scarred and I think he looks much more like a real Thor than the comparatively young and well-groomed Hollywood version being promoted at the moment. Thor hasn't been seen since that date, however he's distinctive enough that he will be recognised when he appears again, so he deserves a name.

I've been looking at some of the possum box temperature data that has been logged by the server, and some interesting facts have emerged - or at least they seem interesting to me. 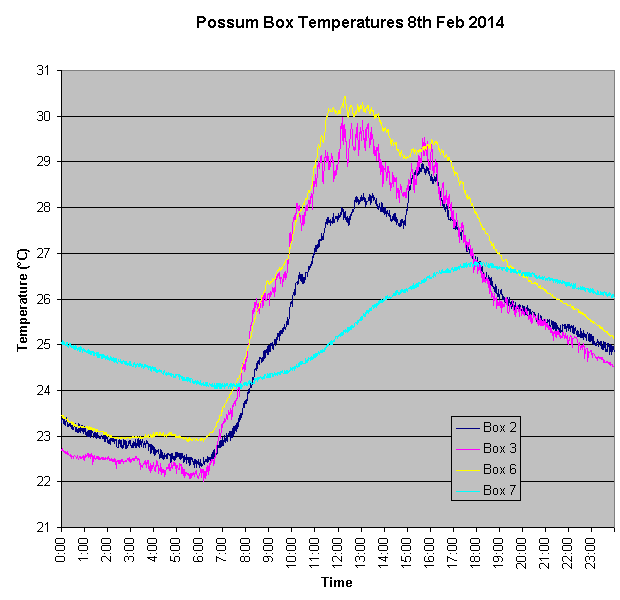 The trend above is typical of a normal day with no possums in any of the boxes. Things that stand out are:

● Box 7, which is in the garage, has a much more even temperature (less variation by more than a factor of two) than the others. This could be why many possums prefer this box.

● The temperature in Box 3 has a lot of short duration spikes in it. I think this is because the sensor in this box is close to the entrance hole, and the box itself is in a comparatively exposed location, so gusts of wind might be blowing directly onto the sensor. I should reposition the sensor further inside the box to make the readings more comparable to the other boxes.

● Box 6, which is better insulated than the others retains heat longer in the evening and seems to remain warmer overnight, possibly because of heat generated by the box camera. Unfortunately, it seems that insulation doesn't reduce the temperature swings as I had hoped it might. 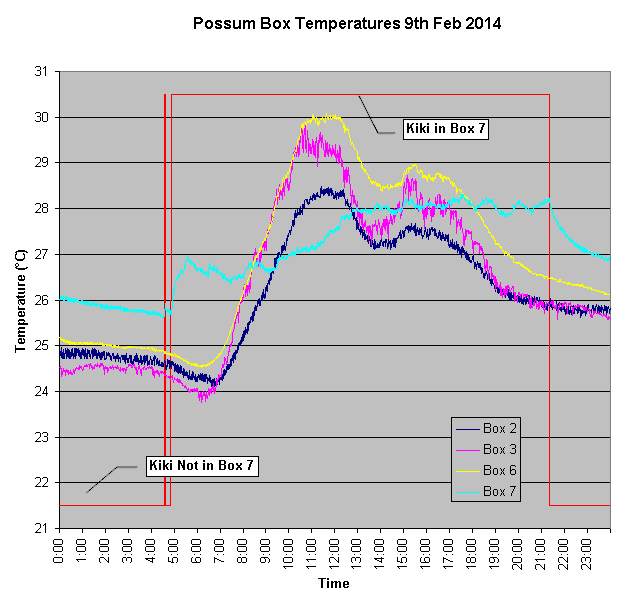 The trend above is from the following day, when Kiki was in Box 7.

The red line shows when Kiki was in the box. The small blip at about 4:30 am was when Kiki entered the box for a couple of minutes and left again. Even during this brief period, the box temperature showed a sharp increase of 0.3 °C.

Once Kiki had settled down the day, the temperature in the box rose rapidly to between 1 and 1.5 °C higher than normal. Also, the box temperature varied up and down by up to about 0.4 °C during the day, and this seemed to correlate to how active Kiki was at the time (although this would take a bit of analysis to prove).

From this, it seems that it would be possible to detect the presence of a possum in a box by temperature alone. And it turns out that people have actually been doing this. The paper Den use by the common brushtail possum in logged and unlogged dry forest in SE Tasmania [Cawthen 2007] tested this technique and found it to be effective and economical. This testing was done in Tasmania, where the average temperature of an unoccupied hollow was 6 °C, and also they put the sensor in the bottom of the hollow where the possum would sleep virtually on top of it. Consequently, they found a huge temperature rise when a possum was present, and that made detection very easy. In the much milder Queensland climate the difference is much less, but still noticeable. Here's a trend of Box 7 temperatures since the start of February, showing when Kiki was in the box. The temperature difference is not striking, but you can see that when Kiki enters the box in the morning, the temperature, which would normally be falling at this time, rises rapidly by at least 1 °C.

By the way, you can see that unlike the rest of the continent, we've been having a very mild summer here. However, it looks like we might get our turn later in the year, since there are predictions that an El Niño is on the way. It will be interesting to see what conditions are like in the boxes on a really hot day.

Also, the graphs above were created manually by me using Excel and aren't available on the web site, however, the intention is to eventually display the data in a format similar to this.

Posted by Possum Dreaming at 12:23 am