Amiri is still around. Often he remains on the roof of the house and doesn't come into the trees when Kiki is around.

Amiri is now completely independent of Kiki and is in the process of being chased off by her. Here's a photo of him in the house, looking nervous.

Poked in the Eye

Please be warned that there are some unpleasant pictures in this blog post.

Recently a one-eyed butcher bird has been visiting and this has prompted me to write a little bit about eye injuries in possums. When I first started this blog, I had initially planned to periodically do specials on possum-related subjects, and it's been over a year since my last special (Toe-biting Possums) so it's probably about time for one now.

But first the butcher bird:

A couple of weeks ago, when I was fixing up the cladding under the eaves (I had to break it when Baxter was trapped inside), a butcher bird landed next to me on the balcony rail and started looking at me expectantly for food. It acted just like a normal butcher bird but I noticed something strange about its left eye; namely that it didn't seem to have one.

Here is the good eye.


Read more »
Posted by Possum Dreaming at 1:50 am 7 comments

Not much new this time. Kiki and Amiri are still visiting together, and there's no sign that Amiri is in imminent danger of being chased away, although he sometimes sleeps alone in Box 7.


Read more »
Posted by Possum Dreaming at 1:23 am 1 comments

I'll start with another cute photo of Amiri. It might seem that Amiri is appearing on the front page an unfair number of times, but he's going to have to leave the area in not too many more months, so I'd like to get in as many photos as I can while he's still here.

Read more »
Posted by Possum Dreaming at 2:07 am 3 comments

I'll start with a cute photo of Amiri.


Read more »
Posted by Possum Dreaming at 1:21 am 3 comments

Dexter hasn't been seen or heard for a while and might have been ejected from the area by Kiki. Wasabi also hasn't visited for a while, but it's fairly normal for him to take lengthy breaks away. Amiri has been off his mother's back for long enough for me to see that he is a little boy possum.

Here's a photo of Amiri peering out of Box 7 when Kiki left him alone in the garage about a week ago.

I'll start off with a photo of Kiki's baby. The little one is now permanently out of the pouch and is occasionally left on its own for short periods. I'm naming this possum Amiri.

A couple of days ago, Kiki turned up with her latest baby back-riding. This is the first time I've seen the baby directly. Here's a photo of the pair.

Read more »
Posted by Possum Dreaming at 12:55 am 1 comments

My main reason for doing this is that Kiki has started bringing her baby into the nest boxes, and you really need full speed video to appreciate the little one leaping around.

To enable streaming mode, simply select it under "Update Rate" as follows: 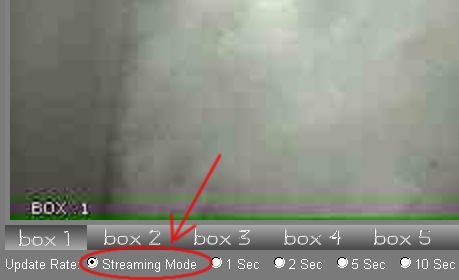 Read more »
Posted by Possum Dreaming at 1:24 am 5 comments

I've seen Kiki's latest baby for the first time. Kiki decided to visit box 7 and the little baby came out of the pouch to play when they were in the safety of the box. The baby is more well developed than I'd imagined. It's well past the "starved frog" stage and looks and acts like a proper possum. It looks like I was wrong in my last blog entry and it will be back-riding before spring.


The baby was very active throughout the day, which probably means that it's sleeping in the pouch for all or most of the night.

Email ThisBlogThis!Share to TwitterShare to FacebookShare to Pinterest
Labels: Kiki, Other Brushtails, Other Ringtails, Spock, Wasabi

Kiki, Spock and Wasabi are all visiting regularly.


Pinot hasn't been seen in over a month. No possums have slept in any of the boxes in over a month, either. I'm not sure why this is; snakes? too cold? Spock has been seen in the garage door several times; I don't know why he prefers it over the nearby box 7.

Kiki, Spock and Wasabi are all healthy and visiting regularly. Pinot hasn't been seen for a while, but that's normal for him. The new male brushtail that appeared last month has visited the possum boxes a few times, but still hasn't visited the house.

Wasabi has been seen a couple of times with a baby possum in tow. He hasn't brought the baby close enough for a good look, so it's not clear whether this is Vindi.


On one hand, this possum looks a bit small to be Vindi (this one is roughly the same size as Vindi was in March) and looks to have less white on the tail, but on the other hand is too big to be a new baby - unless there's another mother ringtail in the area.

Just a brief update: The usual possums; Kiki, Spock, Wasabi and Pinot, have been visiting. No more pythons have been seen.

Here's a photo of Wasabi and Spock in a tree. Although not aggressive, Wasabi is a brave possum who usually stands his ground when confronted by a brushtail. In this photo he's making his way into a tree, not deterred by the presence of Spock.

For a couple of weeks recently, Spock made his home in the ceiling. Here's a photo of him peeping out from behind a light fitting.

A week ago, Wesley stopped visiting and hasn't been seen since. It could be that he was here primarily to have his wound treated and has left because it's now fully healed, however I can't help but be a little concerned; he will be the fourth adult male brushtail to suddenly disappear in almost as many months.

This is highly unusual. Normally, there's a dominant male who remains in the area, and one or two visiting males who stay for a while, then move on to be replaced by others. It's not normal to have no adult males at all in the area.


Since Welsey disappeared, the only brushtails visiting have been Kiki and Spock. Recently, they have taken to visiting separately, so it's possible that Kiki is becoming less tolerant of Spock and will eventually chase him off. Hopefully he'll be allowed to stay around for at least another couple of months.

Only Kiki, Spock and Wesley have been visiting. Here's Spock on the hand-rail, tilting his head like Wesley.

Spock is growing up. He is now fully weaned but occasionally still back-rides. On two occasions he slept alone in box 7. He looked very small curled up in the big box, but he didn't appear anxious about being alone.

Kiki, her baby Spock and Wesley have been visiting regularly.

Kiki's new baby has finally shown himself. We've named him Spock. Here are some photos:

Kiki, Pinot and Marlon are still visiting and Wesley has returned with a bite wound on his neck. It looks like another case of exudative dermatitis. [The wound is actually significantly worse than it looks in this photo; I chose the photo because it's a better one of Wesley.]

Wesley was last seen in November last year and we thought he'd returned to where he came from, but it seems he's come back for medical treatment.

Still just Kiki, Pinot and Marlon visiting the house, but there have been a couple of young ringtails seen around and also a surprise visitor to box 3 (see later).

Over the past few days there has been a bit of a dispute between Marlon and Pinot. They have been chasing each other over the roof and in the early hours of this morning were heard trading insults and threats in the garage. Today Pinot arrived looking like this:

His eye wound is almost identical to the one inflicted on Marlon in January, so it looks there has been some payback happening.

Read more »
Posted by Possum Dreaming at 1:07 am 1 comments

Kiki, Pinot and Marlon are still around with no other possums having been sighted in a while.


Marlon's eye wound has got better without treatment. For the first couple of days, the wound had a nasty scab on it, indistinguishable (at least to me) from exudative dermatitis, but after that it rapidly got better and was virtually gone by the one week mark.

[Sorry that this post if out of order. I accidentally clicked the wrong place and deleted the original and there doesn't seem to be any way to get it back without re-posting it.]

There haven't been any updates for a while because I've been away for work.

Since my last post, only Kiki, Svejk and Pinot have been visiting with any regularity and now even Svejk hasn't been seen for several days. Here are some recent photos of the three:

For a while now, only Kiki, Pinot and Marlon have been visiting.


Read more »
Posted by Possum Dreaming at 3:19 am 0 comments